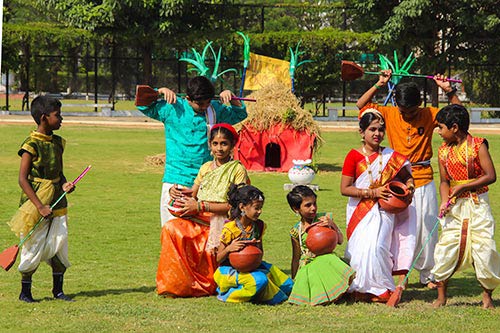 PONGAL, at its choicest charm of traditions!!

Manchester International School did witness a never-before picturesque culmination of culture, tradition, and custom. Unprecedented celebrations marked the grandeur during the festive occurrence of Pongal - the Festival of Harvest in Tamilnadu, ushering in the unison of the fullest fraternity of Manchester International School, thumping in with sublime zeal, zest and zing!

The efficacy of the Pongal celebrations did not see itself constrained, just to the meticulous understanding of the mere history and the plethora of rituals involved in this festival, but on the other hand to duly demonstrate to our young champs as regards the veracity of this tradition and to embrace and engulf the bounteous virtues of Mother Nature and its plentiful endowments to humans, with unending gratefulness and to pressingly pledge to protect, preserve and promote the abundant gifts of our Mother Nature, devoid of any compromise, for generations to come!

Mr. Krishnamoorthy, an organic farmer from Pannimadai in Coimbatore, who has been awarded the ‘Best Farmer Award’ repeatedly for using innovative, environmentally-friendly agricultural techniques was our guest of honour. Mr. Krishnamoorthy, who was earlier honoured by the Head of School, urged children to place the community, ahead of their interests and to give farming a serious thought.

In the midst of festivities, encompassing Dance, Drama, Music & Games, our tiny tots seemed thoroughly thrilled to have had the enthralling experiences of their ride-of-a-lifetime on the bullock cart, leaving them thrilled to bits!!

The much revered Tamil skit was only little short of a boisterous blockbuster, which left the audience awestruck, with its subtlety whilst taking the entire viewers through a journey from the northern part of India to the southern part of India, depicting elaborately as to how and where harvest festivals are observed much alike.

In an earnest endeavour of our School’s unfaltering objective towards the rejuvenation of many declining arts of Tamilnadu, the art of Pottery, perceived to remain a dying age-old traditional art in India, was presented live to our children, who watched and experienced the deftness and craftsmanship with great awe and aspiration!!

The much sought after “Tug of war” contest between staff and students- a matchless spectacular- brought the curtains down to this day long celebrations, with much aplomb and gaiety!!