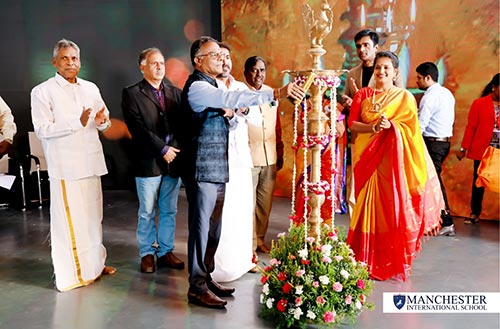 Manchester International School, Coimbatore, celebrated its Grand Annual Day on Saturday, 21st December 2019, primarily based on the glorification of our profound historical Arts & Culture and in commemoration of the 150th birthday anniversary of Mahatma Gandhi.

Significantly, students had come up with perfect performances pertaining to 12 nations worldwide had taken an active part in the celebrations amidst a myriad of acts, replete with music, dazzling dances and hues of colours amidst great zest, vibrancy and elation.

Aspiring students from France, Germany, Argentina and Brazil and other countries who are in India as part of their Rotary Youth Exchange Program, made their presence felt in an astounding way, and were mesmerized by the awesomeness in the performances of the students!

In course of the program, the rich history of Indian Arts and culture was sublimely demonstrated and celebrated to its fullest extent by superlative performances of the school students!

Parents, Community members, Students and Staff members of MIS were present during the occasion in large numbers to encourage and witness the splendid performances by the students!!